This training seminar with international speakers is part of the project “Forgotten Cosmopolitan: The Diverging Fates of Europe’s Circus People in the Wake of the Second World War”. On the basis of already existing research results, the speakers want to inform about the life, persecution, death and survival strategies of circus people in Europe during National Socialism. Together with the seminar participants, we want to discuss why in particular circuses were spheres that in demonstrable cases offered protection to those who were persecuted by the Nazi Regime and their allies. At the same time, circus families with Jewish, Yenish and /or Sinti and Roma background were particularly affected the Nazi persecution. Also, the seminar wants to broach the issue of forgotten victim groups of National Socialism and discuss why circuses and circus people are almost totally absent in accounts of victims of the Nazi regime and WWII? This applies not only to research, teaching and remembrance activities, but also to minority studies and national narratives. Moreover, we want to illuminate the synergies between research, arts and remembrance and to develop new pedagogical paths in commemorative activities. The deaths of the last survivors of the atrocities of National Socialism make the search for new concepts of memory even more urgent. As such, this seminar aims to highlight the potential of studying the history of the circus and the use of circus performances/ stage storytelling in remembering life and repression under authoritarian regimes.The project group CINS, “Circus im Nationalsozialismus”, which will give a performance on the life of Irento Bento, who survived the Holocaust as an artist of Jewish origin in the German circus Althoff. Finally, the seminar aims to generate a new general understanding of the living conditions and security strategies of transnational and marginalized groups. Thus, the project also addresses current societal issues in Europe. 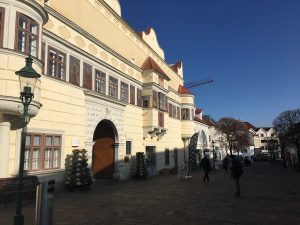 With our seminar we want to a) draw attention in the public to circus people as a forgotten victim group in Europe during National Socialism, and thus stimulate further engagement with the topic. B) To re-map and re-image the cosmopolitan area of circuses before, during and after National Socialism.  Furthermore, the seminar aims c) to develop a broader understanding of the living conditions and security strategies of transnational groups and marginalized communities in the past, present and future. Also, we want d) to show that circuses – as mobile venues – represented areas under National Socialism that could provide refuge for those persecuted by the regime for political or racial reasons. Finally, through the interplay of research and theater/circus performances, we aim e) to generate new pedagogical approaches in education and remembrance activities.

The international training seminar is aimed at teachers and other educational professionals.

The CiNS project group, Circus under National Socialism, has been working with a interdisciplinary approach on this understudies topic for over 10 years. With a scenic-artistic reading, traveling exhibitions and workshops, we are looking for ways to create a critical living culture of remembrance, which also refers to the present. 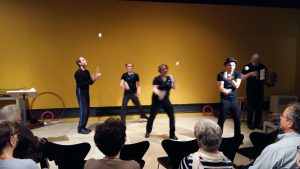 In our teaching format for schools, we cooperate with Kutlu Yurtseven, whose rap theater picks up present discrimination and racism as a central theme. Teachers can choose from two different workshops: In the first workshop, entitled “News 2049”, a news broadcast from the future will be developed. In this way, the connection between the present culture of remembrance and the shaping of the future from the present age can be experienced on the basis of freely chosen topics. After a short introduction about the history and diversity of rap, the “rap workshop” provides methodological impulses to write rap songs.