Originally from Belgium the Sénécas worked as a Circus family throughout France in the interwar period. As a travelling company and without a fixed residence, the nine children of Albert Sénéca (born 1907, Belgium) and Joséphine Sénéca, (born 1907, France), were born in different places in France. In the wake of WWII, the Sénéca family endured the same fate as other French travelling groups, house arrests, detentions, internment in camps. From the French authorities travelling groups were labeled as “nomadic people”.

Since the nineteenth century, the French administration had developed a specific legislation aiming to control so called “nomadic groups”. At the 18 November 1938, French decree-law legalized the internment of “dangerous individuals to secure public safety”. Then, a decision on 6th April 1940 banned all movements of nomads during wartime. Financial reasons explains why house arrests were requested rather than internment: nomads would continue to make their living. After the German Wehrmacht defeated the French army and occupied large part of the country the German military commander in France decreed at the 4 October 1940 that French authorities had to organize internment for all “nomadic people” in the German occupied zone of France.

Accordingly to this decree, the local military commander in Le Mans, Western France, imposed at the 14 October 1940 the internment of all “nomadic groups” in his commanding area. The French prefect of the Sarthe department put this order in action. Documents from the French police archives show that the Sénéca family was arrested for internment in the small town La Ferté Bernard of the department Sarthe on 30 April 1943. Eighteen members of the Sénéca family, mostly children, were sent to the Montreuil-Bellay internment camp (Department Maine-et-Loire). Few weeks later, four other family members were caught and sent to the camp. Among the Sénéca group was also the family of Désiré Sénéca (born 1884, Belgium) and Jeanne Sénéca (born 1882, France) with their seven children.

When the family entered the camp, Joséphine Sénéca declared to be a professional equilibrist. According to the archival documents, her husband Albert stressed to be a circus artist and Albert’s nephew Lucien told to be a circus employee.

The family remained in the camp until its closing in January 1945. 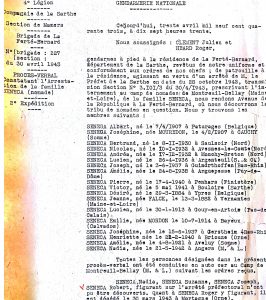 According to the French circus historians Robert and Philippe Barrier, a small Sénéca family circus, led by Juliano and Victor Sénéca, was travelling in the Northern parts of France in 1953. The circus showed similar characteristics of small French family circus companies from the pre-war period. “It [the circus] was carried by a convoy of three vehicles, but was also followed by several wagons pulled by horses”, like circuses from the old days.

Nowadays, the Sénéca family pursues its circus activities with the Montreal Circus.  Recently, the circus was labeled as “Cirque Ethan and Shanly Sénéca”, named after senior director Nicolas Sénéca’s great grandchildren, who was an eleven years old boy at the time of his internment in Montreuil-Bellay.

Author: Laurence Prempain based on a first version by Bruna La Biundo.

Jacques Queyrois:  Political Activist and Owner of the Circus Karmah. From Fakir Acts to the French Resistance

Albert Queyrois, a Frenchman also known by the stage name Karmah, lived a life full of eclecticism and change. He also possessed an uncanny ability to incite political provocation. Born in Bordeaux in 1893, he was originally a cabinetmaker by trade, working in Faubourg Saint-Antoine in Paris. His father, Jean Queyrois, earned his living as a carpenter. His mother, Catherine Despéries, was Read More…

Gisela Nyman, born Blumenthal, was the daughter of a Jewish father and a non-Jewish mother. She grew up in her birth town Leipzig. As a child, the Hungarian actor Marika Rökk became the role model for the young Gisela. At the age of five, Gisela began her ballet training. Later, she took also music lessons. Read More…

Theodor Wonja Michael was born in Berlin in January 1925. He was the youngest of four children of the Cameroonian colonial migrant Theophilus Wonja Michael and his German wife Martha, who originated from Posen (Poznań). When he was one year old, his mother died of a severe illness. Out of economic need, his father joined Read More…