Gisela Nyman, born Blumenthal, was the daughter of a Jewish father and a non-Jewish mother. She grew up in her birth town Leipzig. As a child, the Hungarian actor Marika Rökk became the role model for the young Gisela. At the age of five, Gisela began her ballet training. Later, she took also music lessons. The fact that the father was of Jewish origin had no consequences for the attendance of her dance and music classes.

The Gestapo first picked up her Jewish father, a fruit and vegetable whole salesman, in 1938. From June 1938 to March 1939, he was arrested in the Sachsenhausen concentration camp near Berlin. After his father’s release on 8.3.1939, he received a passport to immigrate to Italy. However, the family stayed in Leipzig, where the father worked for various companies. He was no longer allowed to pursue any independent sales activities. On 19.10.1944, another arrest of the father took place. First, he was taken to the police prison in Leipzig. On 23.1.1945, the transfer to the concentration camp Buchenwald took place. During working duties outside the camp, the father managed to escape with the help of two guards. He managed to get false papers in Leipzig and went to Wuppertal. After the war, Gisela’s father returned to Leipzig and began working again as a greengrocer. The Jewish grandfather, Abraham Blumenthal, was deported from Berlin to the Theresienstadt concentration camp on 4.9.1942 with the 57th transport of eldery Jews, where he died on 18.4.1943.

Gisela did not go to school during the last months of the war. She stayed at home, where her mother took responsibility of the teaching. After the war, Gisela learned to skate on roller skates. In April 1948, the roller skate group “Trio Splendid” was looking for a new member. The head of the troupe, Friedrich Kaufhold, offered the thirteen-year-old a three-year contract of apprenticeship with a probation period. Already in July 1948 Gisela had her first performance at the “New Scala” in Berlin.

When the troupe accepted a commitment in Essen, Gisela enteres as the daughter of her boss Kaufhold the British occupation zone. From then on, the roller skate artists performed only in West Germany. The parents left Leipzig in 1949 and found a new home in Frankfurt am Main. In 1951, Gisela had her first foreign engagement in Oslo. Guest venues in other Scandinavian countries were added. In the hallway of her present apartment still hangs a circus poster of the Danish company Benneweis, whereupon the young Gisela is pictured. 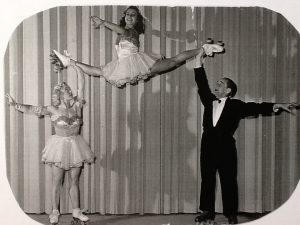 A serious accident in September 1956 interrupted the artist career of Gisela and forced her to switch to the trampoline. With a trampoline troupe she performed in Finland at Suomen Tivoli in 1958. When it came to disagreements over the payment, the troop disappeared overnight and left Gisela alone. The show program was thinned out and needed new numbers. Gisela was asked by the director of Suomen Tivoli, Unto Sariola, if she could imagine dancing with a snake around her neck. The handling of the reptile, the twelve-pound tiger python “Leila”, was taught to her by her future husband Kalle Nyman, a Finn with a Roma background. 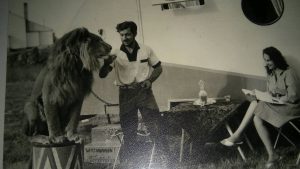 However, the wedding did not take place in Finland, but in Frankfurt am Main in 1960. Gisela gave birth to her first son in 1961. For six more years, the family traveled and performed in Finland, especially with Suomen Tivoli. There, Gisela and Kalle Nyman worked also with the elephant Pepita. The Sariolas, who probably had a Roma family background themselves, were “especially nice and very understanding” to the artist couple, told Gisela. In 1967, the family moved to Frankfurt am Main. In 1968, the second son was born.

Gisela Nyman performs still today. In 2002, she became a member of the “Frankfurter Liedertafel 1827”. Since March 2008, she plays in the senior orchestra of Frankfurt.

From circus acrobat to Resistance fighter: the story of Raymond Gurême

Raymond Gurême was born in 1925 near Paris into a French Manouche (i.e. Sinti in French) family. As did several generations of the family before them, his parents owned a small circus and a travelling cinema: the family toured France and parts of Belgium and Switzerland where they were warmly received in villages deprived of Read More…

Edit Sandor Kleinbarth (1931- ), a circus child during the war

Edit Sandor Kleinbarth was born in Budapest in 1931. Her parents were Sandor and Elise Kleinbarth. Her father came from a “private” Hungarian family. He had learned the art of school riding in the Czech Circus Henry. Also, he developed and presented animal revues with monkeys, ponies and donkeys. Her mother, however, came from the Read More…

Constance Micaela Busch was a third-generation member of one of the oldest circus dynasties in Germany. The famous Circus Busch was founded by her grandfather Paul and grandmother Constance Busch on June 29th 1884 in Svendborg, Denmark.  In 1888, the circus moved to Germany. Three years later, they opened a circus building in Altona, Hamburg. Read More…