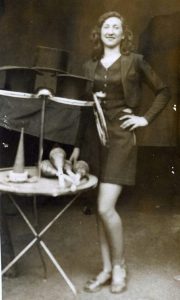 The escape of the Schauerjans family to Switzerland in 1943

The transcript of the escape story of the Schauerjans family is the result of a collaboration between descendants of the circus family and the French historian Laurence Prempain. Until 1943, Rosa (born 1902) and François Jacob Schauerjans (1903) lived with their children Edwige (born 1928) and Roger (born 1938) in Grenoble, France. Two versions of Read More…

From circus acrobat to Resistance fighter: the story of Raymond Gurême

Raymond Gurême was born in 1925 near Paris into a French Manouche (i.e. Sinti in French) family. As did several generations of the family before them, his parents owned a small circus and a travelling cinema: the family toured France and parts of Belgium and Switzerland where they were warmly received in villages deprived of Read More…

The Esther family and its strategy to survive WWII

After WWI, Baptiste Esther (1893-1973) and his wife Méli Falck (1896-1955) run with their children a small circus. About the daughters Rita and Zélie Esther we know that they worked with horses. Baptiste Esther trained also his Spanish godson Marius Swils who lived with the family and later became an agile horse rider. The Esthers Read More…