For decades, the Michelet family owned a menagerie-circus (first Ménagerie Lorraine Giacometti/ later Cirque-ménagerie Michelet). Many articles and advertisements published in newspapers state that this family activity goes back to the second half of the nineteenth century. On tour the family went into different partnerships with other well-known circus companies, like Albus and Grüss/Gruss. Henri Thétard, Journalist, a predator tamer himself and a circus historian, only mentioned the Michelet in his book as a travelling menagerie. The family’s use of trucks can be seen as a sign of financial wealth at that time.

At the end of the First World War, Paul Michelet decided to settle in the city of Gièvres, central France. According to one of his descendant, Marcel Michelet, they were very welcomed by the municipality, which saw no inconvenience that so called “nomads” chose Gièvres as their residency. In the 1920s, other circus and fairground families choose to settle in Gièvres. The city then became one of the meeting places of French circus families. Extraordinary grave sites of the communal cemetery are reminders of the families’ circus background.

Still today, older inhabitants of the village remember stories about the mother Michelet sitting in front of her house on a crate filled with snakes. Local memory tells the story of lions wandering through the church square. Many inhabitants of  Gièvres are caravan owners, using particularly for religious pilgrims during spring and summer time.  According to the last census in 2010 500 of 2500 Gièvres inhabitants declared themselves as travellers.

During WWII, French authorities regarded the Michelets still as a so called “nomadic family”, besides the fact that they could prove permanent residency in Gièvres. The family got arrested and sent to the internment camp Montreuil-Bellay  (see the fate of the Sénéca family). Documents of the French authorities from that time stated that the family, however, was reliable, due to their “behavior, morality and livelihoods”. Thus,and thanks to the property the Michelets owned in Gièvres and to their financial resources in general some family members benefited of early camp releases. The last family members could leave Montreuil-Bellay in 1944 and return to Gièvres. 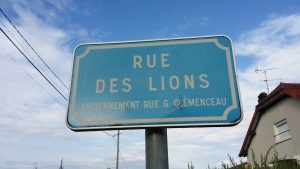 After the War, the city of Gièvres renamed the Clemenceau Street, where the Michelet had built their first houses, into “the Lions Street”. Nowadays, the Michelets have given up their former circus and fairground activities. They are very active in sharing their family history, especially on social networks.

Author: Laurence Prempain, based on a first version of Bruna lo Biundo

Edit Sandor Kleinbarth (1931- ), a circus child during the war

Edit Sandor Kleinbarth was born in Budapest in 1931. Her parents were Sandor and Elise Kleinbarth. Her father came from a “private” Hungarian family. He had learned the art of school riding in the Czech Circus Henry. Also, he developed and presented animal revues with monkeys, ponies and donkeys. Her mother, however, came from the Read More…

The escape of the Schauerjans family to Switzerland in 1943

The transcript of the escape story of the Schauerjans family is the result of a collaboration between descendants of the circus family and the French historian Laurence Prempain. Until 1943, Rosa (born 1902) and François Jacob Schauerjans (1903) lived with their children Edwige (born 1928) and Roger (born 1938) in Grenoble, France. Two versions of Read More…

The Esther family and its strategy to survive WWII

After WWI, Baptiste Esther (1893-1973) and his wife Méli Falck (1896-1955) run with their children a small circus. About the daughters Rita and Zélie Esther we know that they worked with horses. Baptiste Esther trained also his Spanish godson Marius Swils who lived with the family and later became an agile horse rider. The Esthers Read More…